Life as a Fossil Hunter 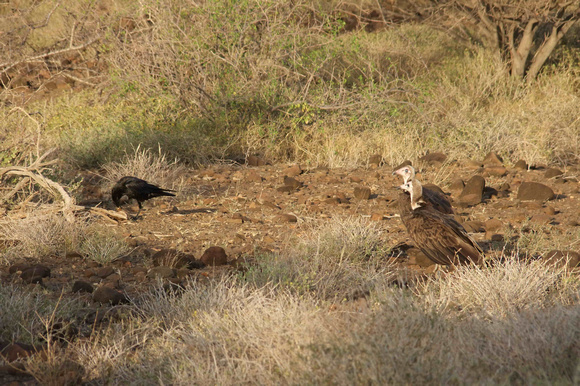 Scavenging birds around the camp

Woken up by echoing bird calls in the first light of the day, I got out of my tent. It was cooler outside and the big fireball was barely above the horizon. I knew it was not going to last, unless the wind is kind enough to bring some clouds. Others were already at the table, waiting for the morning tea to be served. Ravens and vultures were still lingering around, hoping to snatch some scraps of our dinner last night. That was the beginning of my day, as a fossil hunter at Ileret, in the Lake Turkana region.

For people who are city-born and city-dwelling, conditions in Lake Turkana could be harsh. There are a myriad of perils in the wild: thorns, insects, scorpions, snakes and above all, the brutal sun. During the day, the temperature never drops below 30 degrees centigrade, and a piece of shade doesn't make it better. The air is so hot and dry that even if we sweat a lot, we may not notice it, resulting in electrolyte imbalance or heat shock. The key to our survival, as I was told, is to keep ourselves well fed and hydrated. That may sound easy, but it is too often overlooked by those who are new to such hostile environment. 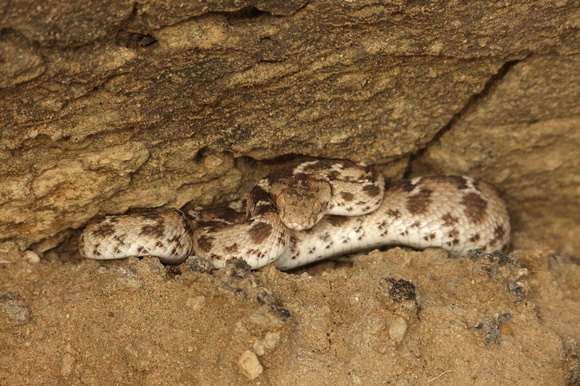 Apart from the relentless heat, other desert dwellers could make our life worse. I was surprised by the overwhelming number of insects at night, despite being in the middle of vast emptiness. Among them were mosquitoes that carry malaria and other blood-sucking flies. There’s never a lack of snakes and scorpions in the Lake Turkana region. I still remember the week during which the team spotted and killed three venomous snakes around the camp. And it was there that I experienced my first scorpion sting right at my thumb top when I was taking a shower in the early evening. The venom caused a continuous stabbing pain in my thumb immediately after I was stung, and the pain soon spread out to my index finger and up my wrist. The pain was overwhelming: I couldn't even sleep without taking a painkiller. Fortunately, the pain lasted for about 10 hours only, so when I woke up the next morning, I was all fine. Although a scorpion sting can cause serious pain, it is generally harmless to human body. However, in rare occasions, it can inflict severe allergy which could be lethal if not treated promptly. 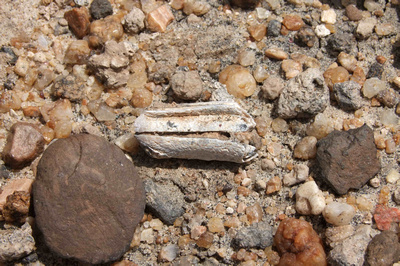 Fossil tooth on the ground 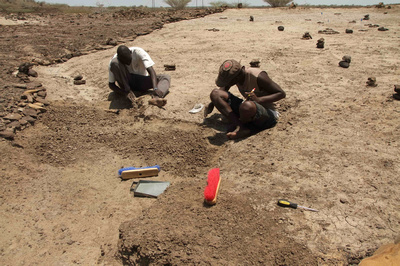 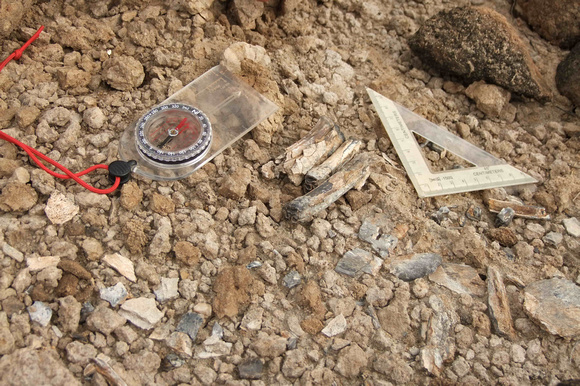 If the overall environment is not intimidating enough, there is more: dealing with rocks of many types and fossils of many shapes. To put it more accurate, we walk over the ancient sediments in the desert, spot out fossil pieces from surrounding rocks, identify the body parts of an animal that the fossils are representing and give taxonomical information to them. If a good exposure is found and fossils are still in situ, we will decide whether to give it an excavation or not. That’s the job of a fossil hunter and it is not easy! I really appreciate the generosity of my fellow colleagues who kindly shared their years of experience. What tools do we use? In addition to our eyes, hands and traditional field gadgets (notebook, pencil, compass, scale, etc ), we use GPS units, digital cameras and palmtop computers for field records. Collecting field information is vital, especially recording the context of where the fossils were found. It helps us to understand how the fossils could have been buried and exposed, so as to recover as many of them as possible. Keeping GPS coordinates of specimens collected over the years helps, too. As more pieces got washed out by rain year after year, we might get parts that belong to the same individual found in the previous field seasons. Most bits of information collected from the field will finally trickle down to a large collection database which keeps the track of every single specimen. 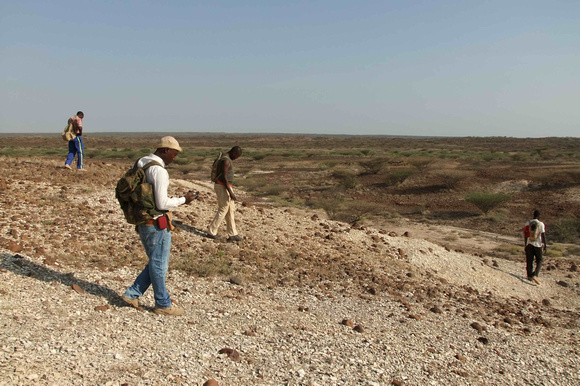 Planning for our explorations is essential, especially in an area as large as the Lake Turkana region. Assisted by GPS, Google Earth and field data over the years, scientist can greatly increase their chance of finding good fossils even without going out of the lab. However, once at the site, detailed plans are often useless, since we have absolutely no idea where the fossils are. What we usually do is to follow our guts and let luck takes over. 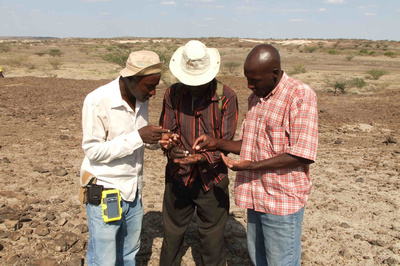 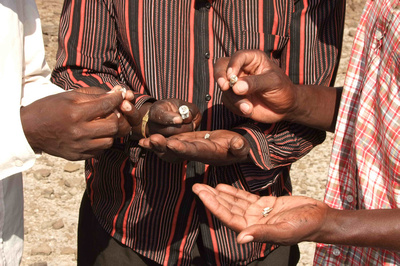 And the best we can hope for is to find fossils of hominins: human ancestors. They are very rare compared with the numerous herbivore mammals, crocodiles and fish. Most importantly, every single one of them may tell the secrets of our distant relatives. I was very lucky to witness the discovery of a few hominin teeth this year. I could immediately feel the strong affinity between the fallen old teeth and myself when I saw and touched those ancient remnants. I felt I was in a time machine, paying a visit to our ancestors who lived a few million years ago. It was fantastic! 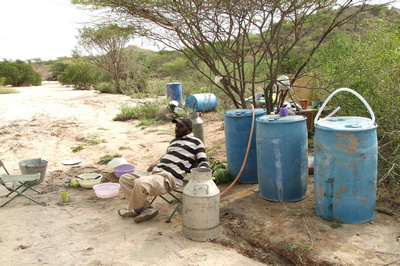 Where water is stored 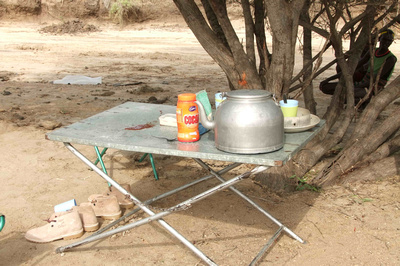 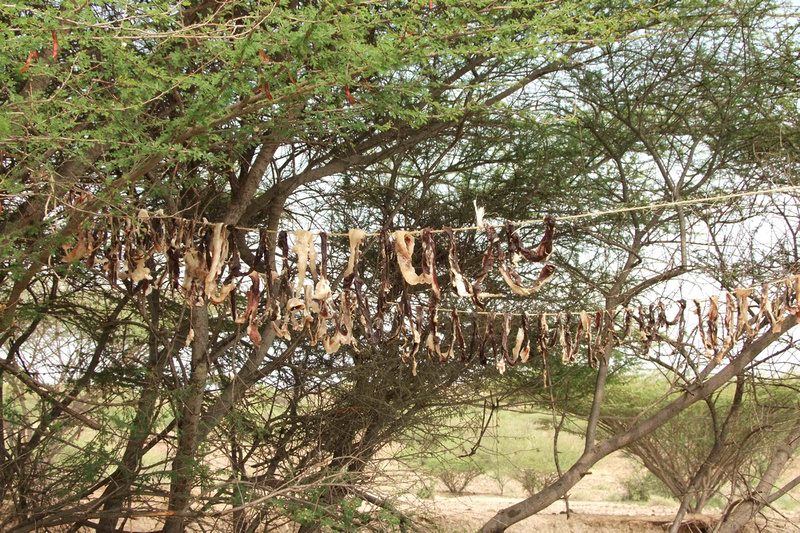 How to preserve meat in the desert

Drying meat in the shade

Hard might the daily seven-hour field work be, handling the logistics of the camp could be even harder. Although the TBI Ileret camp is a real oasis and provides us with a good start, almost everything we used, including food and fuel, was brought from Nairobi 900 km away! The variety of food is always unsatisfactory: usually rice with a stew of beans or meat together with tomato paste and bits of onions. Fresh vegetables and fruits are rare treats in a remote desert such as Ileret. Meat is always welcome, for it gives us strength and energy for such a demanding job. However, a regular diet low in dietary fiber and vitamins not only causes digestive problems, but also weakens our immune system. It happened this year that quite a few of the crew members were sick, including our cook who had pneumonia on top of malaria and was immediately transferred to the local clinic. Although constantly bitten by mosquitoes, I was lucky enough to be out of any trouble like this. 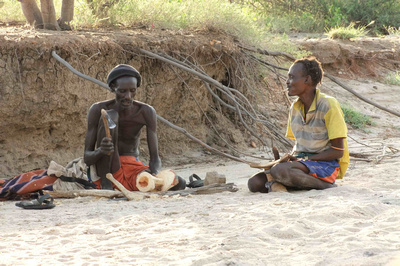 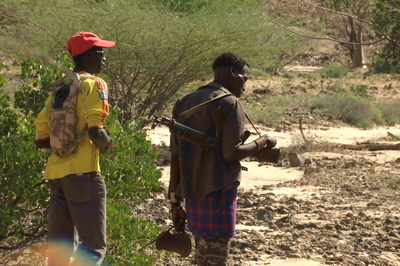 Everybody carries a gun here!

When we were camping at Ileret, we were not alone. Local pastoralists, sometimes with their herds, visited our camp regularly. They even carried guns with them to protect their animals! In nature, however, they were very friendly, bringing in local news and sometimes goats or milk for sale. I could see that they enjoyed the leftovers from our kitchen as well as the drinking water that was provided free. 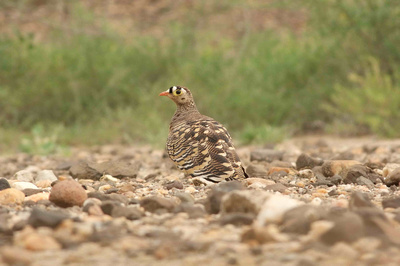 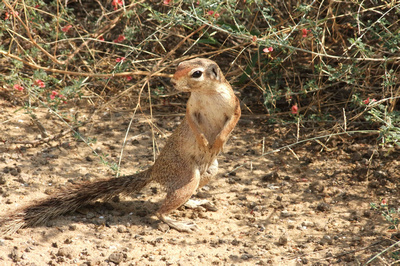 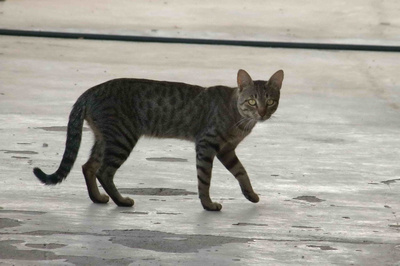 The wildlife in the Ileret area is surprisingly rich. The bushland along the shore of Lake Turkana nourishes birds, small reptiles and mammals of many kinds. While springhares and ground squirrels are common during the day, dik-diks, jackals and even hyeanas are active during the night. There was even a wildcat (Felis silvestris) in TBI Ileret camp! It was seen quite a few times at night, but I was even more fortunate to take a photo of this reclusive creature during the day! 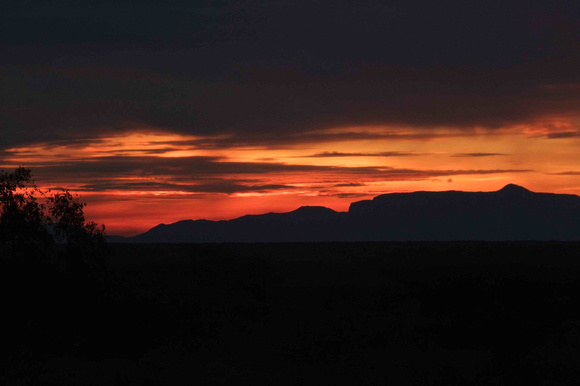 The sky is bleeding

One thing that we never missed at the end of the day was the spectacular sunset. Yet, there was more. On a moonless clear night, there came a full display of the Milky Way. Bright stars and star dust profiled a ribbon stretching across the sky, a scene from time immemorial. It was a luxury only enjoyed by being in the middle of nowhere, but also a grandeur shared by our own ancestors. 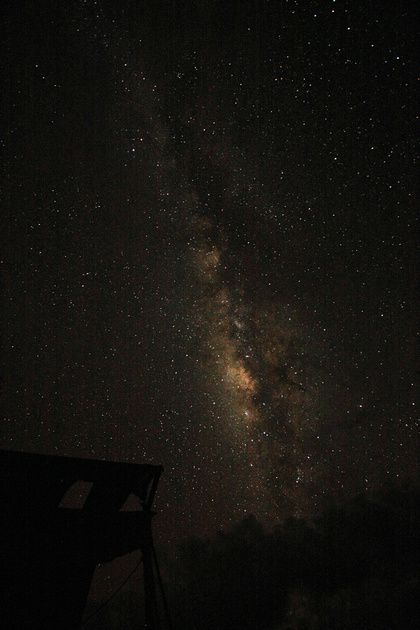 With that in mind, I crept back into my tent, preparing for another day as a Fossil Hunter at Lake Turkana.

PS: Special thanks to Dr. Meave and Louise Leakey who granted me the chance to join the field crew in the field season this year, and to all KFRP field and camp crew members for their support. 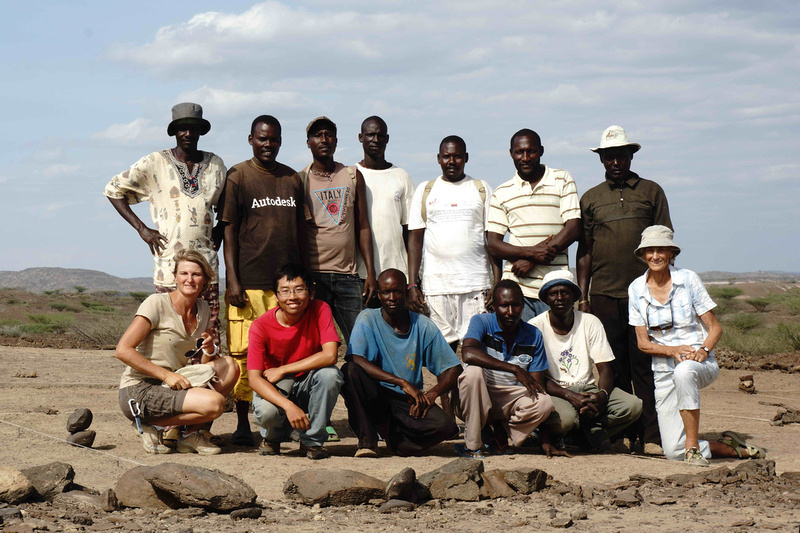 Qiu Wenhui・Photobitat
What a beautiful piece of literature, Deming!
I love the photos of the wildlife there, with them identified!
Such respectable meaningful work with your colleagues there!
Thank you for sharing on your always brilliant Blog : )
Lawrence Nzuve(non-registered)
Great post Mr. Deming. It sounds an awesome trip and great time you had out their. Life as a fossil hunter is always a mixture of fun and adrenaline stimulating experience as well. Am glad you were part of this historical moment and what is more, you were able to to sit down and immortalize your experiences for the sake of humanity.Do visit again and man!
martin kirinya(non-registered)
Hominid gang are pleased by this incredible piece of literature & photography.Thanks for having time to share the world of fossil hunters. Your company out there was highly appreciated and your experience and few lessons on photography,various species of birds and to cap it all anatomy lesson were an experience we will always miss. We do hope you will be part of the Hominid gang come next season.
KUANG Da
A very well written and interesting article of the meaningful field trip! Excellent job, Deming!

The scorpion sting must be extremely painful. The harsh working environment is a real challenge! You are a tough man, Deming!